Ed Bott is digging into the technology behind Windows Activation, and one of the more amusing bits was when he had to use a cracking program to fix a file he had intentionally damaged since Microsoft’s own tool was unable to fix it.  My own amusing story was when I was trying to properly activate our work systems.  Since the volume management auto-registration program (KMS) won’t run until at least 25 Windows 7 systems have tried to register (why? I’ve no idea), I decided to fall back on our key (MAK) that we can use alternatively in limited use.  The key had worked for me fine before when I used the GUI, but when I used the command line ‘slmgr.vbs’ Windows still showed as being un-activated.  I wanted to use the command line so that I wouldn’t have to visit each system to register them, so I tried to force it on my own computer by using the undocumented ‘rearm’ switch.  I figured it would either work, or reset to default settings at which point I could try putting the key back in, but no, I got this instead: 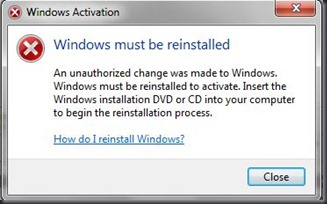 It goes without saying that the OS in fact does NOT have to be reinstalled, but instead the licensing cache has to be cleared out (it also turns out that an extra command is required to register through the command line).  If Microsoft is going to be a bit overbearing in preventing piracy, couldn’t they at least make sure their anti-piracy protections work?  It aggravates me all the more since I’ve always made sure we are properly licensed and I would think that somewhere in the bucket of money we send them every year they could find the funds to fix stuff like this.