These points are based off of the instructions posted here. I did not write that procedure and do not claim to be any sort of expert on DesignJet repair (which will be apparent in a moment). I also got the HP service manual from here (should be a PDF link).

Many years ago I started into the IT business as a hardware repair tech. Part of the duties of this position included repairing HP LaserJet II and III (yes, that long ago) so I wasn’t afraid to tackle this repair job. However, I should note that once I got the 450C halfway disassembled I realized that I didn’t have a ‘spare’ waiting for me at the office if I goofed up along the way so there wasn’t any margin for error. I will note now that these are expensive machines (unlike the now nearly disposable laser printers) and if you feel uncomfortable repairing it you’ll be better off calling someone in!

Anyway, I depend on the printer I am repairing for network diagrams, but unfortunately the plotter doesn’t fall under the purview of the same cost center that employs me so I couldn’t command anybody to have it repaired. If the cost center in question wanted to leave it unrepaired for years that was entirely up to them. At this moment however I am working on some rather involved network architecture plans and really needed the DesignJet to be up, so I took it upon myself to fix it.

As a note, as I discovered later that our DesignJet 450C is the ‘E’ sized version which uses a belt with part number C4706-60082. I had initially ordered the ‘D’ sized belt by mistake (part number C4705-60082). I acquired my new belt from our sales rep Judy Nerone over at Microage.

Before beginning work I unplugged the data and power cables: 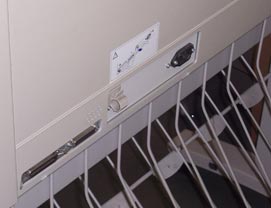 Next I removed the cover by first popping out the right most tab and sliding the cover to the left in order to clear the other tabs:

(Old plastic alert: these are old systems and the plastics, which were of the brittle variety to begin with, are very prone to breaking. Be as careful as you can (most of the steps that involve plastics usually require some decent force) and have some strong glue on hand). 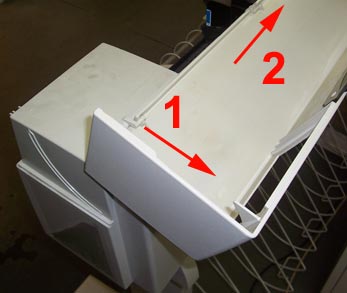 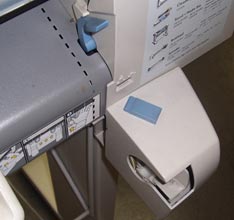 Remove the roll feed supports (if necessary) by removing the single torx 20 screw from both sides and sliding the arms out.

(Note: I had to go down to Home Depot to pick up the torx 20. Ido havea torx 15 leftover from my Compaq days). 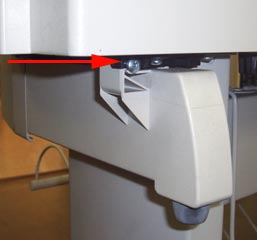 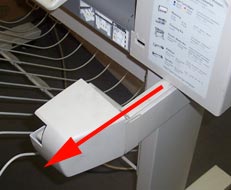 Remove the right cover gently as the control panel is attached to it (the left one is less of worry and comes off the same way). I really had to force the front tab but I was able to remove it without any tools. 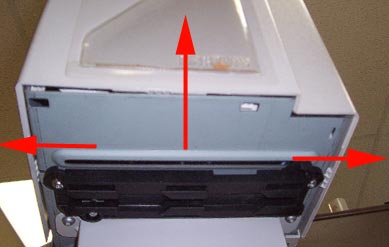 The procedure I am referencing says to remove the control panel and leave the cable attached, however I opted to lift up the retaining tab on the control panel cable and disconnect it from the unit. The reason being that I wanted to minimize the cables contact with the sharp medal of the frame. If you do it like this, when reassembling the plotter make sure to reattach the cable before reattaching the spittoon since that will maximize the working area. 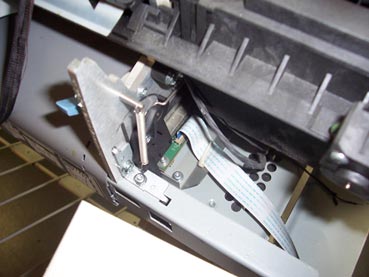 What it looks like so far. Note the poor condition of the belt which was obviously suffering from some severe dry rot. In this picture I’ve also loosened the white trailing ribbon from some it’s clips. 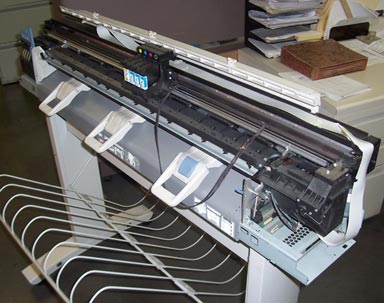 Next we have to remove the spittoon. Note the cables attached to the spittoon (#1). The screw which mounts the spitton to the frame is #2. #3 shows the cutter, when reattaching the spittoon make sure the cutter is in the same place. 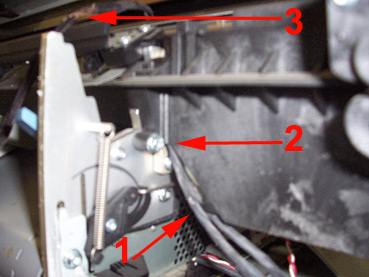 Next remove the encoder strip. Take special care with this part as it tells the carriage assembly where it is at. There are two (I believe 1/4″) nuts on the right (pictured) and a torx screw on the left. Both mounting locations feature holes stamped through delicate medal. Although it did not happen to me (fortunately), I can see where it would be real easy to rip this; on the right side especially. After undoing the nuts on the right, push (hard) on the front part of the medal bracket that it is mounted to(to the left) and there should be enough slack in the strip to disconnect it. Note the third arrow on the right, take special note of how the end of the strip is supposed to mount when reassembling. I’ll also point out that I’ve removed the trailing white data ribbon from its clips and put it around the back right corner of the plotter. 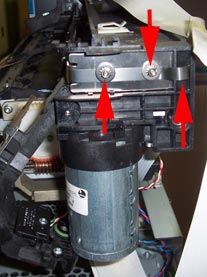 The bracket that held the encoding strip on the right side is then removed by removing one torx screw. 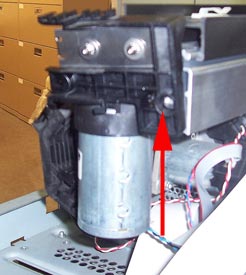 The cutting arm is then removed. 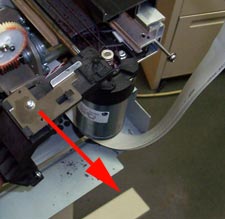 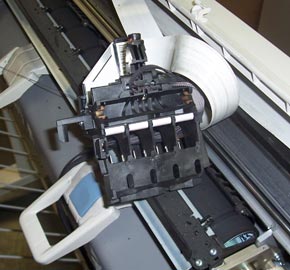 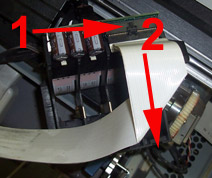 To remove the belt push the motor (#1, on the right side) in towards the left. Where #2 is you should see the spring you’ll be pushing in against. 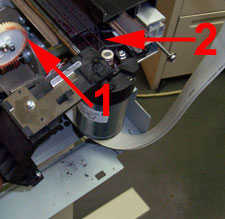 At this point the printer is disassembled as far as it’s going to go and the new belt just has to be added (put on carriage assembly, then pulley, then motor) and the unit reassembled. Note though that I had to air hose out the unit since it was covered with shredded belt, and I had to scrape ink out the belt grooves on the motor and (especially) the pulley. In fact I had to remove the pulley on the left side (sorry, no pics) by pushing on a release clip that is beneath it under the frame. The pulley assembly consists of the wheel, axle, and a washer.

(Update 2/9/2016: I forgot to mention that this article is old enough that I actually had this happen to me again.  I have some nicer photos that I keep meaning to post; it’s on the list.  I figured I’d also mention that I have to keep an old 32bit server around since it is the only one with the original HP driver that lets me compile the job in memory on the PC, since even at it’s max, the printer memory cannot handle a lot of jobs.  I’m still surprised that this gets as much traffic as it does since so many moderately newer plotters can be had for cheap on EBay, if you’re fortunate enough to be near someone who is selling one).

34 thoughts on “Carriage Belt Replacement in the DesignJet 450C”