I recently attended an event at Progressive Field as a guest of Sirius Computer Solutions to watch a Cleveland Indians game. I’m thankful to Sirius for inviting me along, even if some of the speakers that they brought in left something to be desired, however there was something else at the game that was beyond their control that I didn’t care for: the food.

The food looks great, but after one bite I was reminded of a game I attended late last year at Progressive Field where I ate a good deal, but after the fact realized that in my speed of eating I had missed the fact that I didn’t really care for what I had eaten. Part of where this stems from is my part time hobby of cooking. That’s not much of a hobby in my mind, but I’ve met enough people who don’t cook much or at all to know that my limited cooking knowledge can bring to light things that I would probably gloss over if I lacked the little bit of knowledge that I have. I’ll start with the rubens that they served at the game since it’s a great example of what they do wrong there: 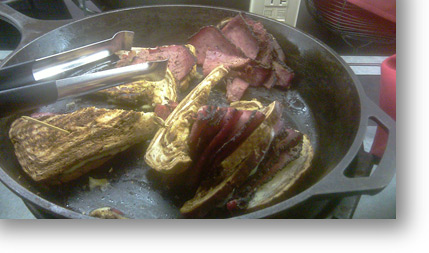 It might not look it, but the presentation on this was actually very nice. The corned beef was ‘real’ meat and not ‘flaked and formed’, the bread was a nice marbled rye and the portions were quite (and some would say ‘too’) generous. However, the whole experiment suffered from flaws that makes one think that food served at Progressive Field begins with good ingredients and ends with looking good and not much in between. The grilled bread tastes like it was fried in mildly used fryer oil, the beef had been seared, concentrating the taste and saltiness of what is already a strong, salted meat, and a layer of soulless sauerkraut made the sandwich too salty to consume and ill tasting at that.

It’s as if no one bothered to taste the stuff .  Needless to say other items pulled the same stunt:

And those were the star performers, other less desirable entrees were the ridiculously oversized hotdogs made from nothing but salt and grease and pizza from Pizza Pan (seriously, is the worst pizza joint in town the best you can do?).  In fairness though what makes me truly sore is that by and large it appears that they use great ingrediants, but the execution of assembling them is so awful.

Either way, vendors don’t have to bother to invite me back there as the food is….disgusting; and I’m not a picky eater.

(If anyone is doing a Browns game though….oh my goodness that’s good stuff!)