I remember an old version of Exchange had the ILS service and upon ‘upgrading’ I noticed that the feature had been eliminated, and nothing much added to the package, apart from management headaches (“You want to flush the queues? Sorry!”). For SMBs, the highpoint of Microsoft Exchange was version 5.5, though the RPC over HTTP feature which was added in 2003 is a notable exception.  I never got a chance to really use ILS so I didn’t really miss it, but I thought the functionality was promising and it provided a nice feature beyond a generic IMAP/SMTP setup.

A little bit ago I upgraded our Exchange 2007 to 2010.  Although we got the upgrade ‘for free’ via SA, the main driver for the migration was so that I could allow an Apple Mac user to access file shares via OWA (Outlook Web Access/Application).  With such a nice feature it didn’t even occur to me that Microsoft would dump it, so when I read up and learned that A) OWA on Exchange 2007 only supports Premium OWA on Internet Explorer and B) Network file share access is only available under Premium OWA and C) Exchange 2010 supports all platforms/browsers under Premium OWA, ergo D) Upgrade Exchange to 2010 to allow my (important) Mac user to access file shares via Premium OWA.

But alas no; even though the Exchange 2010 console appears to support file share access, it has in fact been removed: 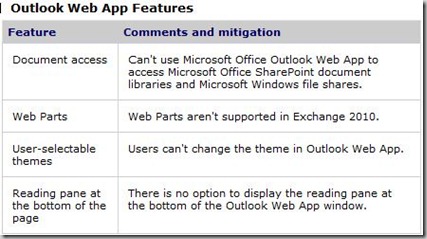 I browsed the ‘”What’s new” for Exchange 2010, but unfortunately I don’t see anything in there that I can hang my hat on that makes it worthwhile to have spent a weekend upgrading it.  There’s the advantage that I’m now very early in the upgrade cycle so it will be some time before I have to upgrade again, but that’s just upgrading for the sake of upgrading (which is not without it’s appeal, but still…).